Saudi Arabia’s Crown Prince Mohammad bin Salman (MbS) was the toast of boardrooms and newsrooms alike in his recent visit to the United States. Billionaires Jeff Bezos and Bill Gates were happy to stooge for the monarch in candid, jolly photo ops. 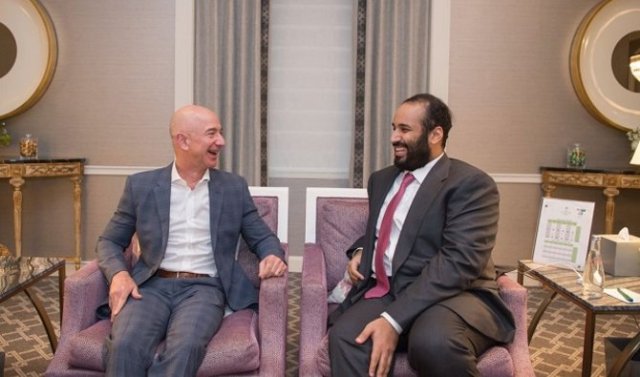 Those photos are a perfect representation of the US-Saudi relationship when it comes to Yemen – billionaires cheerfully posing for professional photos while thousands starve.

Senators Bernie Sanders and Mike Lee recently sponsored a bill that would have ended US involvement in the brutal, Saudi-led and US supported imperialist war in Yemen but the legislation didn’t even come up for a vote. Ten Democrats, including recently elected Alabama #resistance hero Doug Jones, flocked to the side of their Republican colleagues to table the bill.

While US lawmakers continue to “resist” the Trump administration through acquiescence, Yemenis – already some of the world’s most impoverished, food insecure people – face US bombs dropped by Saudi pilots, Houthi ordnance, cholera, famine and mass death.

Who is responsible for what the UN now calls the world’s worst humanitarian crisis?

The dismantling of Yemeni civilian infrastructure and civil society began with the earliest implementations of the Obama administration’s counterterrorism strategy. The hallmark of the campaign was often the destruction of the livelihoods of individuals and the collapse of state infrastructure, in addition to the severe civilian death toll, further destabilizing an already fragile economy and increasing food insecurity.

One of the administration’s first attempts at using the “scalpel” instead of the “hammer” in Yemen took place in al-Majalah, a small village in Yemen’s Abyan Governorate. In 2009, a Tomahawk cruise missile launched from ships in the Red Sea meant for 14 alleged al-Qaeda fighters killed 41 civilians, including 14 women and 21 children. Those that survived the strike lost their means of support when their animals were killed.

Another botched strike against al-Qaeda in 2010 killed the powerful tribal leader and popular deputy governor in Yemen’s Marib governorate, Jabr al-Shabwani. Shabwani was attempting to mediate a negotiation between alleged militants and members of local government and tribal leadership when a US drone struck the negotiation.

Al-Shabwani’s family demanded that the Saleh government hold the US accountable for the death of Jabr. When Saleh and the US failed to meet those demands, they carried out a series of attacks on Marib’s oil and power infrastructure to pressure the administration into stopping its targeted assassination campaign.

Similar attacks against Yemen’s oil infrastructure in retaliation for civilian deaths occurred across the country. According to government assessments, Yemen lost $4.75 billion between 2011 and 2013 as a result of attacks on infrastructure.

As one man in al-Majala described it to me in 2011, “Yemen has been turned into Afghanistan and its people, either in mountains or valleys, were turned into [members] of Al Qaeda.”

While the country’s public infrastructure buckled under the administration’s imperial counterterrorism policy, people from across Yemen were losing patience with the Saleh government. In February of 2011, thousands of Yemenis began filling up public squares in Sana’a, Taiz, Aden, al-Mukallah and elsewhere to demand democratic reforms.

After months of street battles and massacres of student protesters, the US and Saudi Arabia began leading negotiations with Saleh for a peaceful transition of power. The demands of Yemen’s youth led uprising were clear – Saleh must leave Yemen and his assets must be frozen. They understood what is quite clear now – if Saleh were allowed to remain in Yemen with access to his vast wealth and network of alliances, he would not remain out of power for long.

The US State Department and the Saudi-backed Gulf Cooperation Council delegation ignored these demands. The State Department even failed to send representatives to meet with students at Change Square in Sana’a in spite of most major Western foreign ministries establishing visible presences at protest camps. With the protest demands ignored, the stage was set for Saleh to regain power through an alliance with his longtime enemies, the Houthis. While bad policy and poor diplomacy destabilized Yemen and set the stage for the Saudi aggression, Washington insiders laid the foundation for its justification – Iran.

The conventional wisdom in Washington is that the Houthis act as an arm of the Quds force and have done so for some time. Now, the unsubstantiated claim that the Houthis acted as Iran’s proxy in the region as some sort of Yemeni Hezbollah is becoming a self-fulfilling prophecy. While Iran’s political support for the Houthis has always been clear, there was virtually no evidence of Iran arming or training the Houthis until recently. Even still, the Houthis do not take any orders from Tehran and Iran’s support is largely political in nature.

Saudi and Washington saber-rattlers saw their opportunity to escalate tensions with Iran as early as the first Houthi war in 2004. Even as bilateral relations between the US and the Islamic Republic improved during negotiations of a nuclear deal, the Washington consultant class continued to beat the war drums over the actions of what they disingenuously described as an Iranian proxy in Yemen.

Once the Iran nuclear deal was put into place, they were quick to argue that the improvement in diplomatic relations would embolden Iran to instruct its proxy – the Houthis – to increase aggression in the Arabian peninsula – a false notion.

When the Houthis walked into Sana’a in 2014, a fractured political landscape, crumbling infrastructure and years of browbeating Iran had set the perfect stage for the Saudis, with full US logistical and intelligence support, to unleash hell on the people of Yemen.

Since the war began, for many in Saleh’s northern base of power, his deft ability to manipulate western nations and later his stand against Saudi imperialism became a source of deep national pride. Saleh’s image in northern Yemen became that of a defiant underdog bravely standing against Saudi aggression. Saleh’s predictable attempt at seizing power back from the Houthis and his death resulting from the miscalculation was, for some, a blow to that resistance.

Similarly, the Saudi-led coalition has some support in the former People’s Democratic Republic of Yemen where secessionists viewed the Saleh government as a foreign occupation and the Houthis as a further extension of the Saleh regime’s repression of the south.

While millions suffer famine and fear of Saudi bombs, others in places like Taiz endure the brutality of relentless Houthi shelling. Wherever the Houthis are in power, dissent is brutally crushed.

The politics inside Yemen may be complex to navigate but the gradual destabilization that led to Saudi’s war against the Houthis are the results of decades of imperial “counterterrorism,” failed diplomacy and regional intimidation.

A more just American policy in Yemen must begin with an end to American participation in the war that has left so many hungry, sick and dead. Policymakers must look toward distancing the US from Saudi Arabia – in spite of MbS’ promises of “reform.” Policy of the past destroyed Yemen and policy of the future must support Yemenis in their efforts to rebuild in whatever way they see fit.

Jeb Boone lived and worked between Sana’a and Atlanta from 2008 to 2011 where he covered Yemen as a freelance journalist. He is an officer in the Metro Atlanta Chapter of the Democratic Socialists of America.

One thought on “Disaster by Design”